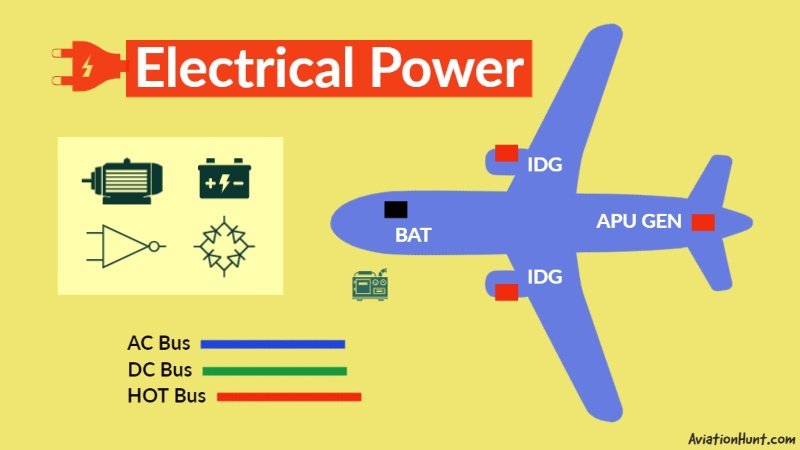 The Aircraft Electrical System makes, supplies, and controls electrical power to aircraft. The complete system can be considered to be made up of different equipment circuits and power supply circuits.

The aircraft electrical system has automatic and manual control features. The system also has protection features.

The electrical system makes and supplies AC and DC power to the aircraft. A standby AC and DC system give normal and emergency power.

Before going deep inside the aircraft electrical system, let’s clear some basics of electricity.

Conventional flows of current are from +ve to -ve. The current will not flow unless there is a complete circuit and there is a voltage (pressure) to drive electrons.

Each equipment circuit provides electricity to various components. They all take their supplies from bus bars that are supplied by generators and /or batteries.

Power supply circuits include generator circuits and battery circuits with transformers and rectifiers. They supply electricity to the bus bars.

Generators can be driven by the aircraft engines; by a Ram Air Turbine (RAT); by a hydraulically driven motor and by the APU (Auxiliary Power Unit).

The normal source of supply is by generators driven by the aircraft engines.

A generator is a machine that converts mechanical energy into electrical energy by the process of electromagnetic induction.

There are two types of the generator – AC generator, and DC generator. In both AC and DC types of generator, the voltage induced is alternating. The major difference between both generators being in the method by which the electrical energy is collected and applied to the circuit externally connected to the generator.

A battery is a device made up of a number of cells that depend on battery utilization. The cells convert chemical energy into electrical energy.

Both types of cells exchange the electrons due to the chemical action of an electrolyte and electrode materials.

The difference between the two cells is in the action that occurs during discharge.

The batteries selected for use in aircraft, therefore, employ secondary cells and are either of the lead-acid or nickel-cadmium types.

The output from generators and batteries is supplied to bus-bars. Then all electrical services take their supplies from the bus-bars.

Aircraft electrical services can be split into the following groups:

Vital Services – Services would be required after an emergency. Components take their supply from the “hot” battery bus or vital battery bus. The emergency lights are also powered from this bus with their own battery back-up.

Essential Services – Services required to ensure a safe landing in an in-flight emergency. The bus-bars are connected in such a way that they can be fed from a generator or battery. Usually called a DC essential bus and an AC essential bus.

These are often used to charge batteries from AC generators.

Rectifiers – Rectifiers convert AC into DC. The process of converting an ac supply to a dc supply is known as rectification.

Transformer – Transformers are electrical components that transfer electrical energy from one circuit to another through inductively coupled electrical conductors. This only works with AC. It has two coils. The primary coil is supplied with ac. This ac supply causes it to produce an alternating magnetic flux field. This alternating flux field cuts back and forth across the secondary coil and induces an ac voltage into it. If the secondary coil has fewer windings than the primary then the voltage is reduced – if it has more windings then the voltage is increased.

A switch is used to isolate the circuits. Some other switch types are used to direct the current into pre-determined parts of a circuit. Switches are characterized by the number of poles, number of switched positions, and type of switched contacts (permanent or momentary).

Proximity switches used in similar locations to micro-switches like cargo doors, passenger doors, and landing gear UP and DOWN locks.

Relays and Contactors are almost the same things. Both operate in the same way. The difference between them is their physical construction and application.

Relays are generally used for low current applications. Contactors are also known as breakers. Contactors are used for switching higher currents. For example, the Contactor can be used for connecting battery power to the aircraft. The features of a contactor include the main power contacts and auxiliary contacts used for indication and control of other devices.

Fuses are protective devices designed to interrupt an electric circuit whenever the current reaches a level that could cause damage to the wiring or components within the circuit. The fuse is a “weak link” in a circuit. It is placed in series with the load so that all load current will flow through it. When the current flowing through a fuse exceeds the minimum fusing value, the element melts and breaks the circuit, and current flow ceases.

Electric motors are devices that changes electric power to mechanical energy. A coil of wire through which the current flows rotates when placed in a magnetic field.

The APU drives a third, auxiliary, generator called APU GEN. APU Generator can replace one or both main engine generators throughout the flight envelope. This also supplies the aircraft electrical network when the electrical ground power unit is not available. The aircraft network can be supplied by a ground power unit. For this, an external power receptacle is provided.

A static inverter transforms DC power from Battery 1 into one KVA of single-phase 115 V 400 Hz AC power, which is then supplied to part of the AC essential bus.

Two main transformer rectifiers, TR 1 and TR 2 supply the aircraft’s electrical system, with up to 200 A of DC current. A third (identical) transformer rectifier, the ESS TR, can power the essential DC circuit from the emergency generator, if the engine and APU generators all fail, or if TR 1 or TR 2 fails. Each TR controls its contactor by the internal logic.

Two main batteries, each with a normal capacity of 23 Ah with a nominal voltage of 24V, are permanently connected to the two hot buses. Each battery has an associated Battery Charge Limiter (BCL). The BCL monitors battery charging and controls its battery contactor.