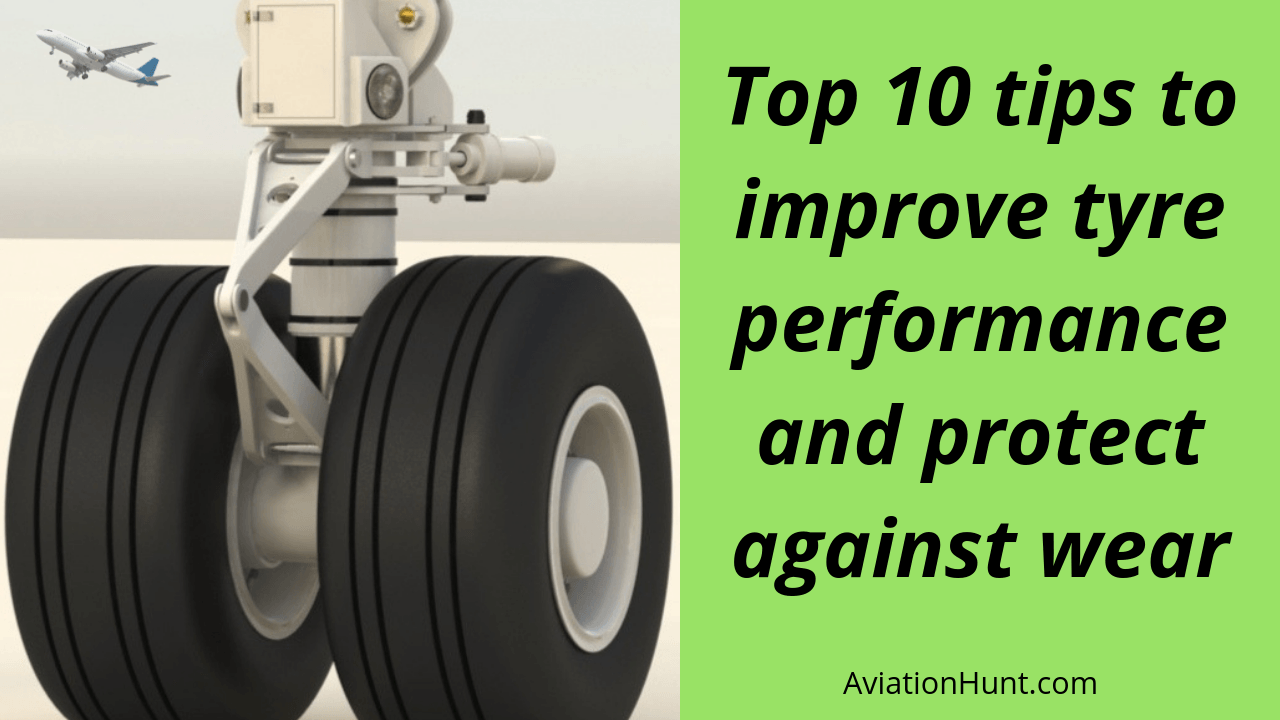 Aircraft tyres are under severe strain during takeoff and landing. Under normal conditions, with proper control and maintenance of the tyres, they are able to withstand these stresses and perform as designed.

Loaded tyres that are left stationary for a long time can develop temporary flat spots. If an aircraft is parked for 30 days or longer, you should jack to remove weight from the tyres.

Tyres that have been subjected to unusually high service braking or operating conditions such as REJECTED TAKEOFFS or OVERSPEED LANDINGS (Overspeed landings are those that exceed the tyre speed rating) should be removed and scrapped. Even though a visual inspection may not show apparent damage but tyres may have sustained internal structural damage.

Crosscut runway surfaces drain water rapidly but increase the tyre wear. Tyre failure upon landing can have several causes. Landing with the brakes on is one of them. This is mitigated on aircraft with anti-skid systems but can occur on other aircraft. Other errors in judgment, such as landing too far down the runway and having to apply the brakes heavily, can cause overheating or skidding. This can lead to flat-spotting the tyres or blow out.

Tyres should be kept clean and free from contaminants such as oil, grease, hydraulic fluids, tar, and degreasing agents which have a deteriorating effect on rubber. Contaminants should be wiped off with denatured alcohol, then the tyre should be washed immediately with soap and water and inspected for surface damage such as softening or blistering.

Keep airport runway and taxiway surfaces clean from FOD. Cleaning of runway and taxiway is the responsibility of the Airport Authority. Ramps and hangar floors should be kept free of all foreign objects that may cause tyre damage. This requires continuous diligence on the part of all aviation personnel. Do not ignore foreign object damage (FOD). When discovered, action must be taken to remove it. While FOD to engines and propellers gains significant attention, much damage to tyres is avoidable if ramp areas and hangar floors are kept clean.

Tyre damage on takeoff is often the result of running over some foreign object. Thorough preflight inspection of the tyres and wheels, as well as maintenance of hangar and ramp surfaces free of foreign objects, are keys to prevention of takeoff tyre failure. A flat spot caused on the way to the runway may lead to tyre failure during takeoff. Tyres dissipate some static electricity in service but this conductivity will change with the cleanliness of the tyre surface, atmospheric conditions and runway surface.

Proper tyres inspection can save lots of maintenance costs and increases the life of tyres. For the reason that here I’m discussing 10 easy ways to improve tyre performance and protect against wear.

Daily pressure checks are critical because aircraft tyre assemblies can lose as much as 5% of inflation pressure in 24 hours. Before placing wheel assembly into service, perform a 24 hours pressure retention check to ensure that the wheel assembly is holding pressure properly. Aircraft tyre pressure must be checked when the tyres are cool (at ambient temperature) because the heat generated during taxis, takeoffs and landings can result in elevated pressure readings. Always allow 2 hours of cooling time.

2. Remove tyres that are more than 10% underinflated

3. Avoid Over Inflation of Tyre

As it often leads to uneven tread wear and reduced traction, making the tread area more susceptible to cuts and placing greater stress on aircraft wheels and landing gear.

All tyres will stretch after the initial inflation, causing a volume increase and thus a drop in pressure. Tyres should not be placed in service until they have been inflated for a minimum of 12 hours. The tyre pressure should then be checked and inflate the tyre, if necessary.

After the 12 hours stretch period to make sure the assembly is still holding inflation properly. This is especially important for tubeless assemblies because they can lose pressure from multiple locations, such as the wheel valve, o-ring, fuse plug, overpressure plug, wheel cracks, and similar areas.

All tyres are balanced at the factory. The red balance dot on the sidewall is to be aligned with the inflation valve for optimum tyre and wheel assembly balanced with less vibration. Gear misalignment, worn or lose gear components, improperly torqued axle or wheel nuts, flat-spotted tyres, and similar problems can cause vibration on an aircraft.

7. Avoid the No. 1 cause for early tyre removal – Foreign Object Damage

By diligently clearing all foreign objects from ramps and hangar floors, damage due to foreign objects can be reduced. Even something as innocuous as a washer can cut a tyre that is under heavy load.

If cords are visible or cord exposure exceeds acceptable limits, the tyre should be removed. Cuts, cracks, and other conditions may require removing the tyre from service.

9. Examine tyres for uneven wear and correct the cause

Such as gear misalignment or improper tyre inflation. Tyres with camber induced asymmetric wear can be demounted and mounted in the reverse direction to extend the life of the tyre.

10. Remove tyres when the tread is worn to the base

Tred wears to base or of any groove at any spot or to the depth stated by the aircraft manufacturer. This requires removing the tyre from the aircraft.

In this way, aviation tyres can be protected against wear and improved their performance.