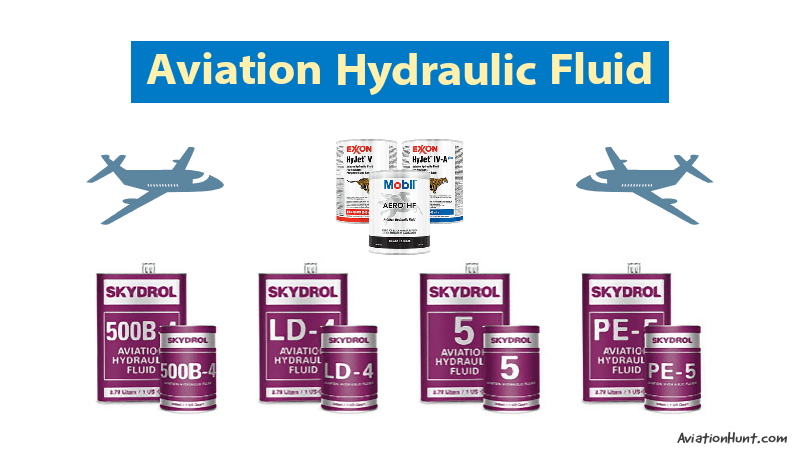 Hydraulic system liquids are used primarily to transmit and distribute forces to various units to be actuated. Liquids are able to do this because they are almost incompressible.

Hydraulic fluids make possible the transmission of pressure and energy. They also act as a lubricating medium, thereby reducing the friction between moving parts and carrying away some of the heat.

An ideal hydraulic fluid would have the following properties:

There are three types of hydraulic fluid commonly used in Aviation:

Phosphate ester-based Fluids are most widely used in civil transport category aircraft. These fluids are extremely fire-resistant. However, they are not fireproof and under certain conditions, they burn. Also, they are very susceptible to contamination from moisture in the atmosphere.

Skydrol and Hyjet are types based on their performance. Nowadays types IV and V fluids are being used in the aviation industry.

Why use the right Hydraulic Fluid

Manufacturers of hydraulic components usually specify the type of fluid best suited for use with their equipment in view of the working conditions, the service required, temperatures expected inside and outside the systems, pressures the liquid must withstand, the possibilities of corrosion, and other conditions that must be considered.

Care must be taken to ensure that the components, seals, gaskets, and hoses installed in the system are compatible with the type of fluid in use.

What to do if the aircraft hydraulic system is served by the wrong type of fluid?

Intermixing of hydraulic fluids can lead to system failure. Petroleum-based and phosphate ester-based hydraulic fluids should not mix because of differences in composition. Neither interchange seals specified for particular fluid. In case of any intermixing of fluid, drain and flush the system immediately, and maintain the seals according to the manufacturer’s specifications.