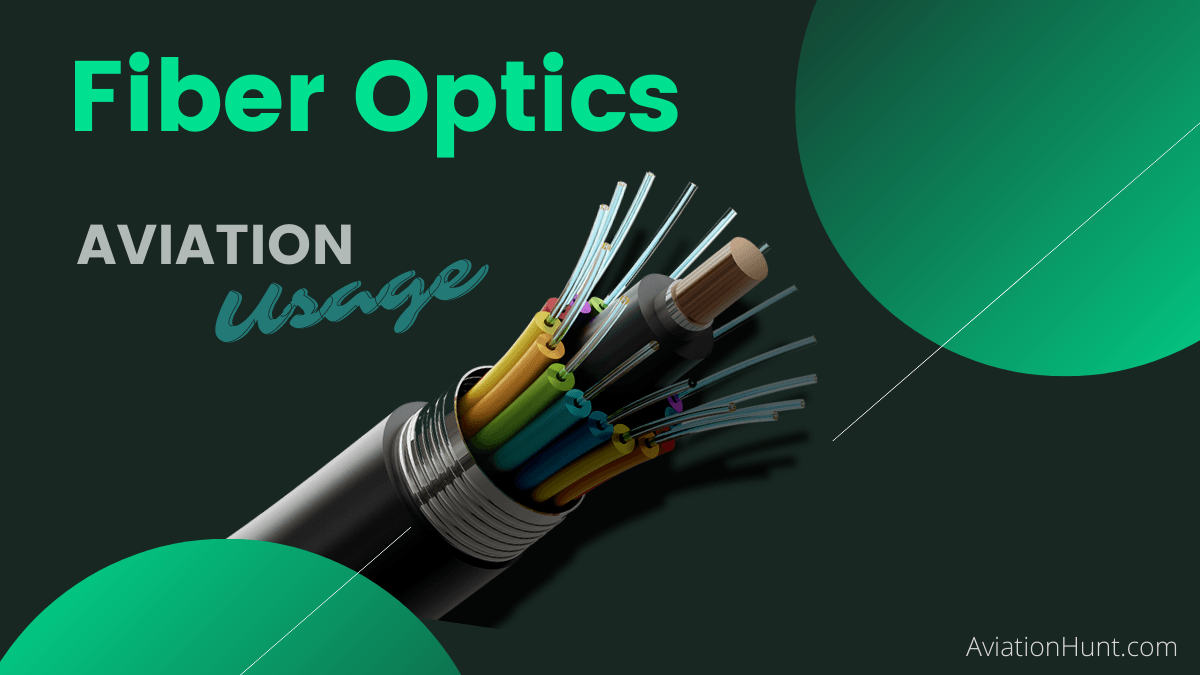 While many of us have heard the term “fiber optics” or “optical fiber“. This technology uses light. Some of us really understand what it is. If you do not know about this technology, then you have come to the right place. Here I will explain some basics about optical fiber technology, its purpose, features, benefits, and use in aircraft.

What is fiber optics

An optical fiber is a solid rod of glass. It is finer than a strand of human hair and is very flexible. It is made of silica and is exceptionally pure. The silica has to be free of any distortions or impurities, which is necessary in order to prevent any light transmitted along the fiber being scattered as the waves meet the impurities.

The fiber is made up of a solid core of high-density silica glass. Its diameter can be as small as 0.05mm although some systems use thicker cores. This has an outer cladding of a slightly less dense silica glass which reflects the light rays (has a lower refractive index), As the light rays travel along with the fiber core they reflect from side to side off the cladding.

The fiber is encased in a plastic coating that prevents external dust and moisture from attacking the glass. Sometimes several core/cladding arrangements are arranged together and it is all protected by carbon or aramid fiber with a polymer (plastic) outer coating.

Fiber optics are used for the high speed (at speed of light) transmission of data using light. They are a form of the (solid) waveguide. As a data transmission system, the fiber-optic cable provides the following benefits.

How does fiber optics work

The fiber optic cable replaces the conventional electrical cable for data transmission from one unit to another, these units are often called LRUs in aircraft. A power supply is required at both ends of the optical cable.

The data is received at the transmitting LRU and transduced into an electrical signal, it is then converted into digital data which uses an LED or laser to launch the data into the fiber.

At the other end, the light signal is picked up by a photo-detector which converts the light signal into an electrical output. This might be used to operate an instrument, store data into a computer, put data onto a bus, etc.

A coupler is used to join 3 or more fiber optic cables together. All couplers have some power loss. This will include: Directional loss or cross-talk caused by backscatter in the coupler; Port to Port loss or Insertion loss – this is based on the splitting ratio and Coupling loss – anytime there is a connection or a coupling in a fiber optic cable there is some loss.

The three basic elements of a fiber optic cable are the:

The core material may be either plastic or glass. Glass is used on aircraft systems.

The cladding is a material whose refractive index is less than that of the core. Total internal reflection at the core/cladding interface confines the light to travel within the core.

This means that the light, once launched into the end of the optic fiber, remains trapped within the core, and emerges at the other end with little loss.

Fibers with plastic cores also have plastic cladding. Such fibers exhibit high losses and are widely used in communication systems for short-distance transmission.

Optical fibers are either single-mode fibers or multimode fibers. A mode is a set of waves defined by Maxwell’s equations for the particular fiber geometry and core/cladding interface conditions.

Attenuation is a signal loss that causes a decrease in light intensity as it travels along with the fiber. It is measured in decibels per kilometer (dB/km) and the three main causes are:

One impurity, which is of particular importance, is the OH ion (water). Not possible to eliminate moisture altogether but has to be kept low as possible within the core material – less than 1ppb (part per billion).

Scattering losses occur as a consequence of microscopic variations in material density and composition, and from structural irregularities and manufacturing defects. At these minute boundaries, there is a change in the refractive index, and light is scattered. Any light that is now less than the critical angle can escape from the core and is lost.

Radiative losses occur at any bend in the optical fiber. The light will radiate out of the fiber at any bend. For example, with a single-mode fiber with a 1% difference of refraction index, the radiation loss is negligible for bend radii greater than 1mm, but for a bend radius of 0.5mm, the losses would be substantial.

Attenuation is also a function of the optical wavelength.

Loss due to reflected light at the end of a boundary. Causes most problems when light leaves the end of a fiber and can be reduced if the end of the fiber has an anti-reflective coating.

This occurs when the light enters the fiber but at a large angle to the fiber centerline.

Scattering caused by micro-bends between the core and the cladding. These bends are significantly smaller than the macro bends with radii smaller than the diameter of the bare fiber. One cause is shrinkage due to temperature change where the outer layers shrink in length and cause the core to bend within the cable structure.

Fiber optic cable is a channel for transmitting light that represents data. This light has to be ‘put in’ the fiber at one end and received (or allowed out) at the other. The light sources used are LEDs and semiconductor laser diodes (sometimes called Injection Laser Diodes (ILDs)). LEDs are capable of sending signals with power of between 0.1 and 10mW into the ‌fiber. Such devices have a peak emission frequency in the near-infrared, typically between 0.8 and 1.0um.