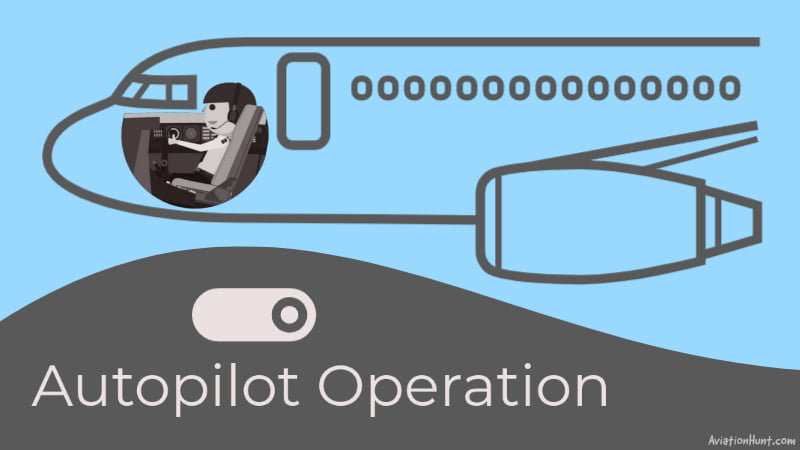 The autopilot system is capable of keeping aircraft stabilized in all three axes laterally, longitudinally, and vertically. Early autopilot systems did this function during cruise only, but most autopilot now controls all flight from take-off to landing.

The main purpose of the autopilot system is to relieve the flight-crew of controlling the aircraft’s attitude for the entire duration of the flight.

Autopilot has two modes of operation i.e manual and automatic.

In manual mode, the pilot selects each maneuver and makes small inputs into autopilot. Then autopilot moves the flight control surfaces to perform the maneuver.

In automatic mode, the pilot selects the attitude and direction for a particular flight. Then autopilot moves the flight control surfaces to attain and maintain these parameters.

To understand the working of autopilot first you should know what the pilot actually does before autopilot takes the control of aircraft.

The basis of autopilot operation is error correction. When an aircraft fails to meet the inputs given by FMC or pilots, an error signal is generated, and this error has to be corrected to achieve desired outputs. The autopilot system automatically corrects the error and restores the flight attitude desired by the pilot.

Now, we can say autopilot closely works with flight management computers to take programmed inputs. However, pilots can change or override the autopilot command during flight. For that, a separate flight control panel is given.

Autopilot system can be categorised into –

There are many autopilot systems available in the industry but they feature a wide range of capabilities and complexity. High-performance transport categories of aircraft have autopilots with higher capabilities than light aircraft.

The nomenclature of the autopilot system might be a little different for different aircraft models, but the system and working principle are almost the same.

AFCS capabilities vary from aircraft to aircraft autopilot systems. Most AFCS are now more advanced and they are integrated with navigational aids, flight directors, and autothrottle systems. AFCS combines these all commands into a single flight control interface for better management and control of aircraft.

If we see the level of integration, auto landings are also possible using autopilot. For that autothrottle system is integrated into the flight director and autopilot systems with glide scope modes.

How does autopilot work

When the autopilot (A/P) is selected ON, and if the aircraft moves from its given path, this is sensed by the sensing unit (usually gyro). A signal is sent to the computer (A/P computer or controller) where it is amplified and sent to the autopilot servo in the flight control system. A/P servos are an electrically powered motor or hydraulically powered jack. This moves the control surfaces to return the aircraft to the datum. Then feedback signals from the servo (output signal) and sensing unit (input signal) are sent back to the A/P computer.

There are 4 basic components of autopilot –

The sensing element is usually called pick-off. It is a device to generate an electrical signal in response to an aircraft movement. A transducer is connected to a gyro. This transducer can be a potentiometer or variable resistor type. Most modern aircraft use an LVDT or RVDT. In each case, the basic principle of generating a signal is – moving the primary coil relative to the secondary and the induction into the secondary is proportional to the amount of overlap between the two coils.

The A/P computer is a controller that collects and sums the signals. An amplifier is also a part of the autopilot computer which is used to strengthen the signal for processing. It takes the input from gyro and other systems like navigation, and combines them, then sends it to the A/P servo to input the flying control system.

The Command unit is the human interface of the autopilot. It allows the pilot to tell the autopilot what to do.

Autopilot follows the route programmed by the pilot into the FMS.

The computed command indications by the flight director relieve the pilot from the many calculations required for the desired flight.

Actually, the flight director system is an autopilot system without the A/P servos because all the sensing and computations are made the same as autopilot except, here the pilot controls the aircraft by moving the control surfaces by following commands displayed by the flight director.

Now one thing we need to clear here, aircraft oscillate around their vertical axis while flying a fixed heading. This is natural and common for many aircraft.

This unwanted airplane yaw motion is caused by the dutch roll or air turbulence.

But anyways these oscillations are not good for aircraft stability. So they have to be corrected. Continuous rudder input is needed to counteract this effect.

Then the yaw damper comes into play. By using a yaw damper, oscillatory motion can be corrected.

A yaw damper receives error signals from the turn coordinator rate gyro. Oscillating yaw motion is counteracted by the rudder movement, which is made automatically by the rudder servo in response to the polarity and magnitude of the error signal.

For the 3-axis autopilot system, the yaw damper is part of autopilot, but for the 2-axis, it can be a completely independent unit.

An autothrottle system will automatically set the thrust levers in the cockpit to the correct power setting and adjust the fuel flow into the engines accordingly. This system is simply an extension of the autopilot to allow the pilot to maintain the aircraft’s speed or engine power settings automatically.

Fly by wire technology manages the flight controls by electrical power instead of traditional cables, rods, and pulleys design.