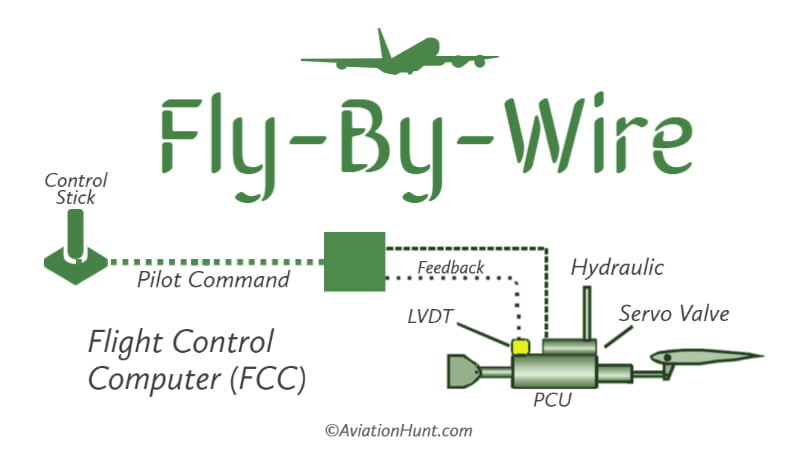 Fly-By-Wire is a system that regulates the flight controls by electrical wires and computers. Fly-by-wire (FBW) replaces all the conventional mechanical linkages like cables, rods, pulleys, etc by an electronic interface.

Airbus has replaced the conventional control column and control wheel with a side-stick in their aircraft, making use of computers, and fly-by-wire technology.

How does Fly-By-Wire work

When the pilot moves the control column or stick from the cockpit, those movements are sensed and converted into electronic signals. These data signals are then interpreted by computers to regulate actuators that move flight control surfaces according to aerodynamic conditions. These computers are commonly called flight control computers (FCCs). FCC also monitor signal from various sensors installed in aircraft to make automatic adjustments that enhance the flight.

There are many advantages of using a fly by wire compared with mechanical systems.

The weight of the mechanical components linking the primary flight controls to the control column is quite considerable. The elimination of the conventional connecting rods, cables, and pulleys saves weight.

All mechanical linkage that is levers, rods, cables, and pulleys removed which increases the payload or saves fuel for the same payload.

The most obvious feature of FBW systems is the improvement in handling characteristics and more rapid control response. The many small deficiencies in the handling of even modern airliners can be eliminated through the efficient use of computers which can make the aircraft responses to control inputs match exactly what the pilot would want them to be.

Built into the software are the aircraft’s safe flight envelope parameters. Any control input by the pilot that would cause the aircraft to exceed these limits is automatically canceled, which ensures that the aircraft’s structural limits are not exceeded.

Another advantage of the use of FBW is that it may be used to control the ailerons in a manner that will alleviate the effects of wind gusts. The aileron and spoilers can be actuated as soon as the air data computer senses the increased vertical acceleration created by encountering a gust.

A disadvantage of fly-by-wire is that all the system is electrical and electronics. So that electromagnetic interference such as lightning strikes could be a problem. The system has back-up facilities such as duplication and triplication of hardware and software. There is a mechanical standby mode to overcome the possibility of complete electrical failure, however, It gives limited flying control authority.