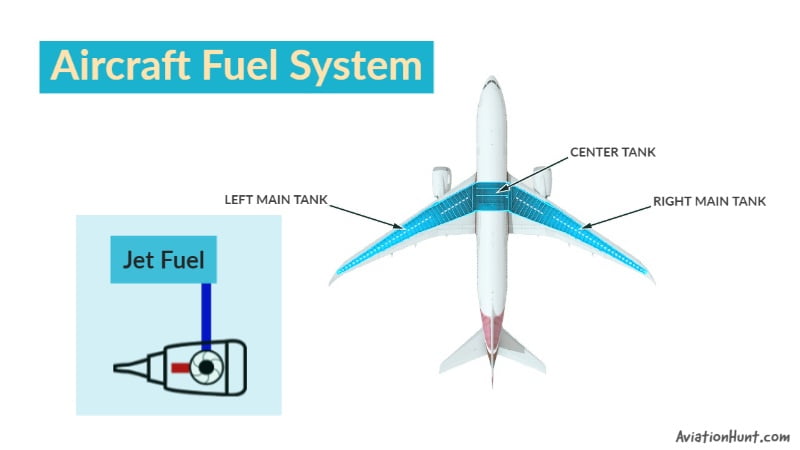 The aircraft fuel system stores and supplies fuel to the engines and the APU. Aviation fuel is used to convert into heat energy and then kinetic energy in the aero engine.

All aircraft powered by engines require fuel on board to operate the engines. The basic requirements of any fuel system are to provide a continuous flow of contaminated free fuel to the engines at a pressure and flow rate to sustain operations regardless of the attitude of the aircraft.

Lets dive in to –

Aircraft Fuel System – from Storage to Engine Feeding and Indications

Aircraft Fuel System is not a single system. It consists of various subsystems. The exact subsystem varies from aircraft to aircraft model or from different manufacturers, but the principle is the same. To understand the complete working of fuel system of any aircraft, first you need to understand the basic elements, components and various small subsystems that contribute to design a complete fuel system.

There needs to be some form of storing for the fuel prior to it being used by the aero engines. It is stored in fuel tanks near the aircraft’s longitudinal center of gravity in the wings and center fuselage.

There are three basic types of aircraft fuel tanks:

Integral Fuel Tanks are used in the transport category and high-performance aircraft. It is a part of the structure of the wings or the fuselage.

The advantages of integral tanks are that they are easily maintained, are cheap, and save weight.

These tanks have access panels for inspection and repairs of the tanks and other fuel system components. On large transport category aircraft, technicians need to physically enter the tank for maintenance.

When entering an integral fuel tank, all fuel must be emptied from the tank, and safety procedures must be followed.

Surge tanks are empty tanks located in the wing outboard of the main wing tanks. These are used for fuel overflow. A check valve allows the one-way drainage of fuel back into the main tanks. Surge tanks also used for fuel system venting.

Some aircraft models allow additional fuel tanks to be installed. These additional tanks, usually located in the fuselage section of the aircraft.

This method of fueling an aircraft is similar to the way most motor cars are fueled on the garage forecourt. The biggest disadvantage during overwing refueling is that of time to refuel. Access to the tanks is difficult and requires step ladders, high rise platforms, etc and the actual filing process can be slow. Great care needs to be exercised when using this method of refueling to avoid spillage. Overwing refuel points are still fitted to many large aircraft, but they are rarely used.

This is a system of refueling where fuel under pressure (max 50 psi) is supplied from a bowser, tanker, or refueling pumping vehicle. It is common at airports to have the fuel pumped underground. A vehicle connects to the ground connection after lifting a steel cover plate and pumps the fuel into the aircraft. The bowser’s (fuel tanker) fuel hose is connected to the refueling point. From this single point, there is a pipework system connected to all the tanks in the aircraft. The fuel is controlled into each tank by energizing solenoids in the refuel valves.

The benefit of single-point pressure refueling at a fueling station is, it is accessible by ramp refueling trucks which allows all aircraft fuel tanks to be filled with one connection of the fuel hose.

Advantages of pressure refueling include:

Sometimes, generally for maintenance, the fuel needs to be removed from the tanks. If personnel need to enter the tank for inspection purposes, there needs to be some means of draining that fuel away. Prior to entering a tank for any reason, the tank will need to be defueled and drained completely.

The only way fuel can be removed from a tank during a defuel operation. Even after a complete defuel, there are still puddles of unusable fuel left in the tanks and this has to be removed by draining. The drain ports are also used for taking fuel samples.

As fuel is pumped into or out of the tanks (refueling, defueling, engine use) air has to be allowed into and out of the tank. Failure to do so could cause the tanks to rupture during refueling operations or a vacuum to occur when the engines are running and thus starve them of fuel.

When allowing venting careful consideration has to be given as a highly explosive fuel/air mix is being moved from the tank/s to the outside atmosphere. Also when allowing air into the tanks contamination may enter via the venting system.

The purpose of the venting system is to:

There needs to be a system to feed fuel to the engines. Although engines will suck fuel using their own pumps, booster pumps are provided to ensure a positive flow.

The APU fuel feed system supplies fuel to the APU. The APU usually receives fuel from main tank 1. However, with the use of the fuel boost pump switches, any fuel tank can supply fuel to the APU. Most aircraft have separate standby fuel pump for APU.

For most large aircraft it isn’t structurally possible to land an aircraft at its maximum all-up weight. Usually on long-distance flight aircraft will take-off heavier than they are allowed to land.

During the flight, fuel is burned and aircraft weight falls. If a serious malfunction causes a return to base just after take-off the pilot needs to dump some of the fuel overboard to reduce the weight of the aircraft. This is done using a fuel jettison system.

It is worth noting that due to environmental and cost concerns, aircraft do not often jettison fuel, they will usually opt for an overweight landing – with special checks to be carried out by the maintenance engineer afterward.

Aircraft fuel lines can be rigid or flexible depending on location and application. Rigid lines are often made of aluminum alloy and are connected with Army/Navy (AN) or military standard (MS) fittings. However, in areas like engine compartment and wheel wells, subject to damage from debris, abrasion, and heat, stainless steel lines are often used.

During leaks at fittings, technicians should not overtighten any leaky fitting. If the proper torque does not stop a leak, depressurize the line, disconnect the fitting and visually inspect it for a cause.

If two metal plates are placed close together (but not touching) with a dielectric (this may be air or fuel – or any other material for that matter) in between, a capacitor is formed.

The value of a capacitor is given by the formula: C = εA/d

Where A is the surface area of the metal plates and d is the distance between them. These two values are fixed by the manufacturer of the unit. The value of ε (lowercase Greek letter epsilon) is altered by changing the dielectric constant, and that happens as the level of the fuel is changed. This is because fuel and air have different values of ε (permittivity).

Capacitive tank units are normally calibrated at the manufacturer end, so it doesn’t require on-wing calibration.

There is a need to compensate for the change in fuel density and there are a couple of ways of achieving this. The simplest form of the compensator is a small capacitive unit (called a compensator) that sits at the bottom of the tank, often close to the sump drain.

Each vent surge tank vents to the atmosphere through a NACA type intake connected with a vent duct. Inside the vent duct, there is a vent protector and a flame arrestor. The function of the vent protector is to prevent clogging of the vent duct by ice formation. The flame arrestor reduces the risk of a ground fire igniting the fuel tanks. Fuel spilled through the vent pipes into the surge tank is induced back into the outer cell by a scavenge jet pump using motive power from the wing fuel pumps.

The center tank vents into the LH vent surge tank.

Overpressure protectors are also installed in A320 to relieve pressure in the tanks that might occur through vent blockage or a pressure refueling gallery failure. See AMM system description, how overpressure protector relieves fuel to other tank or discharge overboard to protect the tank from rupture.

Each tank has two centrifugal booster pumps. All wing tank pumps are fitted with pressure relief sequence valves which ensure that, when all pumps are running, the center tank pumps will deliver fuel preferentially. When the center tank is empty, fuel is supplied from the wing inner cells. There is no direct feed from the outer cells to the engines.

Two inter cell transfer valves are used to transfer fuel from the outer cells to the inner cells when the fuel quantity gets to the low level (about 750 kg). Each valve is operated by an electrical motor.

FQIC (Fuel Quantity Indication Computer) performs the fuel mass calculations. A320 has a capacitance type system to indicate fuel quantity. There are 5 probes in the center tank and 14 per wing tank.

In each tank inner cell, fuel probe No. 2 and in each outer cell fuel probe No. 13 have diodes that give the fuel temperature to the FQIC for indication on the ECAM system display.

In case of failure of the quantity indicating system, the fuel Manual-Magnetic Indicators (MMIs) must be used to monitor the quantity in the tanks. A320 is equipped with 4 Magnetic level indicators per wing and one-per center tank.